There are some who say, “Those who do not study the mistakes of the past are doomed to repeat them,” which is a paraphrase of the saying by George Santayana who actually said, “Those who cannot remember the past are condemned to repeat it.” Though both statements sound very similar, they are in fact very different.

I agree that if we can’t remember what happened in the past, we’re likely to make the same mistakes. But there’s a difference in remembering what happened (so that if a similar situation comes up in the future we can make improved choices), and actively studying and spending a lot of time thinking about the past, and specifically focusing on the mistakes while doing so.

Our children go to school and are forced to study (for years) what we believe humanity’s mistakes were and are, and when that’s over many go to college and study some more in-depth. In medical school, those studying to become doctors have to focus on illnesses and knowing everything they can about those illnesses and how to treat them. Not surprisingly (due to the Law of Attraction) many of these students start to notice things that are wrong with them and imagine they have the diseases they’re studying.

From the Wikipedia article on Medical Students’ Disease:

The Law Of Attraction (AKA Essene Mirrors) mirror back to us what we’re thinking about and focusing on vibrationally. This is helpful in purifying ourselves of any negative thoughts and habits as spoken about in the Lake of Fire article. The world is our mirror showing us clearly whatever is negative in us and whatever is positive in us. If we notice something we don’t like, we manifest it into our world in order that we can understand that we don’t like that thing we were focused on. Then we are supposed to wash that away from our minds, and when we wipe it away from our minds, it will stop showing up in the world we see around us.

We don’t get mad at a mirror when we see we have dirt on our face, instead we are grateful that it showed us the dirt so we can wipe it off. In the same way we shouldn’t be angry that something “bad” happens in our life, because life was just a mirror to show us that there is something negative inside of us that is attracting that into our world. We should be thankful for the incident and focus on the opposite.

There are many “bad” things going on this world, and people tend to focus on those things because they say, “We need to know about this because we don’t want to have that happen to us.” Most people in the world focus on watching the news so that they will be informed on what’s going on, but the mainstream media just gives them a constant barrage of things to be angry or fearful about, keeping them in a low vibration. Then some wake up to that and become truthers. Some prime examples of things truthers focus on are: chemtrails, chemicals in the food/water supply, vaccines, false flags, common law / corporations, GMOs, factory farming animal torture, etc.

When I went from me believing the mainstream news to me becoming a truther back in 2015, I actually felt like I got even more fearful, and I know I saw some who became even more angry (at being lied to and abused through the trauma-based mind control of false flags, etc.). Thankfully I leaned on God and trusted Him, and got out of the fearful state, but I see many people in supposed truther community who are still stuck in that negative frequency of fear and/or hate.

I am not saying we can’t be knowledgeable about current events, like George Santayana said we have to remember the past so we don’t make the same mistakes again. But we shouldn’t dwell on the negative things in the world because dwelling on them just attracts more of them.

The “bad” things we run into are reflections of things we don’t like about ourselves, and we’re supposed to use the world as a mirror to purify ourselves, but instead of doing that we tend to just focus on the things we see and call it reality and we keep getting back more of the same because that’s what we’re focused on. Sadly those in the truther community tend to chase after negative things so it’s no wonder they get into a fearful/angry state of being after a while. But it doesn’t have to be that way.

I know that focusing on certain negative things attracts those things to you, because shortly before my deliverance I was led (by demons) to try to figure out what some of my health issues were. I didn’t know they were being caused by demons at the time. So, the more and more I studied all my symptoms, the more and more I thought I had worse and worse diseases, and then the worse my symptoms got and it was this huge spiral which was getting out of control, until I was told by someone else, it’s getting worse because I’m looking into it. I was becoming a hypochondriac. But it was the result of the Law Of Attraction / Essene Mirrors. I was having my fear of sickness shown to me. So I went through my deliverance (which has a lot to do with going through the Lake of Fire IMHO) and after that I got a lot better very quickly. We just have to accept the negative, repent of it, and choose to do the opposite. I repented of my fear concerning my health and I chose to trust God to get me healthy. I prayed to like healthier foods and to get healthier, and He certainly did that for me.

Focusing our attention on people getting diseases and dying, getting sick from vaccines, etc. is just going to bring those stories into our lives more to show us that we’re in a state of either anger, fear, or worry. We need to let go, trust God, and realize everything happens for a reason, and those who get sick have attracted that sickness for a purpose, just like I attracted the sickness I went through. These things are for our learning, but we don’t have to be fixated on them. We should learn the lesson, move on focusing on the opposite (people getting healthier in this case), and just remember in the back of our head not to do things that lead to sickness). Our focused attention should be on what we DO want, not what we don’t want. 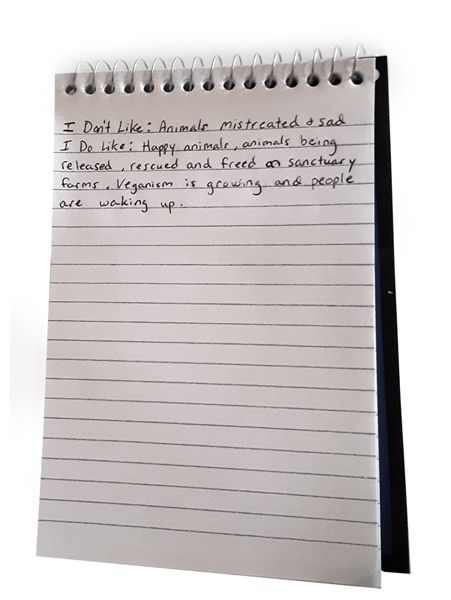 I Do Like: Happy animals, animals being released, rescued and freed on sanctuary farms. Veganism is growing and people are waking up.

For this example, whenever you see a picture of a sad animal or one being mistreated, turn it off, look away, scroll away, whatever you have to do to not spend time thinking about it, and think about the opposite. For this example, you may want to find videos or images of happy, playful animals or those being taken to sanctuary farms to skip about and enjoy their freedom. People are waking up more and more and according to the fact that we can raise others’ vibrations around us and the law of attraction, we will eventually see the world at peace the more we work on ourselves and do this. It will happen, so just be thankful it will happen and focus on appreciating people who are doing this currently.

Another example would be:

I Do Like: People waking up to vaccine harm, and nurses sharing their testimonies with others.

One nurse posted this on Facebook the other day:

So, I share these types of stories that are uplifting, more so than the depressing stories of people being harmed. The more we focus on and share positive stories like this, the more they will happen. We can still be knowledgeable (not sticking our heads in the sand) but also be positively focused rather than being pessimistic.

If what we think about is being attracted to us, why would we want to spend so much of our time thinking about things we don’t like about other people, don’t like about the world in general? We should instead always try to see the best in people and focus on the positive things happening in the world right now so that we attract more of that into our lives.