A while back I read an article that referenced this book You Don’t Understand the Bible Because You Are Christian by Richard Gist. After I learned that the trinity was a false doctrine added by the church years after Christ died, I studied the supposed “trinity proof text” verses thoroughly. All of a sudden I could understand the bible much more clearly. Everything in it pointed to Jesus (Yehoshua) being a messiah, not YHWH in the flesh. He never claimed to be YHWH.  I realized that because of that false doctrine the bible was muddy, unclear, confusing. Furthermore, innocent children know to question, “If Jesus is God, why does he have a God? Why did he have to grow in wisdom? Why did he say by himself he could do nothing?” We just lost that innocence by people telling us it’s supposed to be a mystery, even though the bible says Jesus (Yehoshua) came to help us have understanding, not confusion.

The trinity is confusing. False beliefs make the bible confusing. I called it the “Trinity Fog”; it spiritually blinded me from seeing the truth in scripture. With that false belief out of the way, all of a sudden verses were making so much more sense. I learned about the Jewish law of agency, what a Shaliah was, and how Jesus (Yehoshua) was another savior, like Moses and I saw how the disciples never said Jesus (Yehoshua) was YHWH, but always YHWH’s Christ.

None of those verses made sense when I had a Christian mindset. When I started thinking like a Jew, understanding their viewpoints on the messiah and saviors, everything became crystal clear.

The writers of the bible had a Jewish mindset, not a Christian mindset, so it’s important to understand their perspectives on things. This book, You Don’t Understand the Bible Because You Are Christian discusses a view things from the Jewish perspective that Christians, in general, might not see clearly.

Euphemisms & Conventions in the Bible

One of the more interesting parts of the book, to me, was learning about the euphemisms. I read a little bit from the book and discuss it in this video:

Some of the conventions discussed in this video are meeting women at a well at a combination of goats and clothing. Also what is meant by foot washing or giving the hand?

Because the early followers of Jesus (Yehoshua) taught that he came to do away with the sacrifices because YHWH never asked for sacrifices, I’ve always had an interest into how the idea of clean versus unclean meat came about.

In this video I read a portion of the book that discusses an interesting perspective on that.

Another interesting chapter was on who the prophets were. We get the idea in mainstream Christianity that prophets tell the future, but that’s not what they were known for. Usually they were speaking for YHWH about current events.

Personally, I believe the kundalini spirit is the Holy Spirit. But a lot of mainstream Christians think it’s an evil spirit that makes people act crazy and get naked, etc. But that’s what the prophets in the Tanakh (OT) did.

As a follower of Christ, and through my various studies on the Essenes, I don’t agree with everything Richard Gist says, but, overall, his book is a very interesting one to check out to get a new perspective on the scriptures. 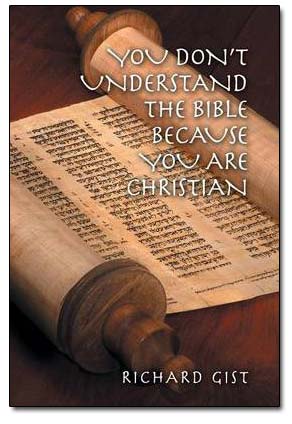