The scriptures are very clear that YHWH is our Father and Jesus (Yehoshua) is our brother (Romans 8:29, Matt. 12:50, John 20:17). No one in the bible thought YHWH became a man, and not one of Jesus’ (Yehoshua’s) followers claimed he was YHWH.

Who the Disciples Thought Jesus (Yehoshua) Was

Matthew 16:13 When Jesus came into the coasts of Caesarea Philippi, he asked his disciples, saying, Whom do men say that I, the son of man, am? 14 And they said, Some say that thou art John the Baptist: some, Elias; and others, Jeremiah, or one of the prophets. 15 He saith unto them, But whom say ye that I am? 16 And Simon Peter answered and said, “Thou art the Christ, the son of the living God.” 17 And Jesus answered and said unto him, Blessed art thou, Simon Barjona: for flesh and blood hath not revealed it unto thee, but my Father which is in heaven.

Once again if you’re the son of the living God, it means you’re necessarily not the living God. And being a “son of YHWH” doesn’t make you YHWH, or else we’re all YHWH. Angels, Adam, Israel and believers in the Messiah are all called “sons of God” in scripture.

Luke 9:20 He said unto them, But whom say ye that I am? Kefa answering said, The Christ of God.

Otherwise translated as God’s Messiah (Mashiach). The word Mashiach/Messiah/Christ means anointed. People were anointed with oil in the OT to do things for YHWH as His Messiah, such as serve as King, priest, judge, etc. There are many anointed ones in the OT.

The bible talks about how Jesus (Yehoshua) was anointed Messiah.

Acts 10:37 You yourselves know what has happened throughout Judea, beginning in Galilee with the baptism that John proclaimed: 38 how  God anointed Jesus of Nazareth with the Holy Spirit and with power, and how Jesus went around doing good and healing all who were oppressed by the devil, because God was with Him.

From a trinitarian point of view this verse becomes nonsensical, “how God anointed God with God and with power, and how God went around doing good and healing all who were oppressed by the devil, because God was with God.

Obviously if YHWH is with you, it means you’re not YHWH. Furthermore, if you’re YHWH, you don’t need to be anointed by yourself with power. You’d already have all the power in the world. And once again the word “Christ” or “Messiah” means you are, by definition of the word “Messiah,” not YHWH since YHWH is the one who anoints the Messiahs.

So far we have the disciples calling him “YHWH’s Christ,” and “the son of the living God,” both of which imply he’s not YHWH AKA the living God. They also referred to him as a prophet of YHWH, which makes sense since when you’re anointed by YHWH, you are usually anointed to speak to people for YHWH just as prophets do.

The disciples believed this passage in Acts was talking about our Messiah.

Acts 3:19 Repent ye therefore, and be converted, that your sins may be blotted out, when the times of refreshing shall come from the presence of YHWH; 20 And He shall send Jesus Christ, which before was preached unto you: 21 Whom the heaven must receive until the times of restitution of all things, which God hath spoken by the mouth of all His holy prophets since the world began. 22 For Moses truly said unto the fathers, A prophet shall YHWH your God raise up unto you of your brethren, like unto me; him shall ye hear in all things whatsoever he shall say unto you.

And when we go back to Deuteronomy 18, we get more context.

Deuteronomy 18:15 YHWH thy God will raise up unto thee a prophet from the midst of thee, of thy brethren, like unto me; unto him ye shall hearken; 16 According to all that thou desiredst of YHWH thy God in Horeb in the day of the assembly, saying, Let me not hear again the voice of YHWH my God, neither let me see this great fire any more, that I die not. 17 And YHWH said unto me, They have well spoken that which they have spoken. 18 I will raise them up a prophet from among their brethren, like unto thee, and will put my words in his mouth; and he shall speak unto them all that I shall command him.

YHWH says they were perfectly right to ask to not hear His voice anymore. If people claim that Jesus (Yehoshua) is YHWH, they would have to say that YHWH lied here, since He said they would NOT hear His voice but people heard Jesus (Yehoshua) speaking. And YHWH says He would send somebody else to talk for Him because they were right to have asked for someone else. YHWH clearly says the prophet from Acts 3:22 is a man like Moses from Moses’ brethren who would be commanded on what to say so the people would NO LONGER have to hear YHWH’s voice anymore.

Who Jesus (Yehoshua) Claimed to Be

John 12:49 For I have not spoken of myself; but the Father which sent me, He gave me a commandment, what I should say, and what I should speak. 50 And I know that His command leads to eternal life. So I speak exactly what the Father has told me to say.

John 17:1 These words spake Jesus, and lifted up his eyes to heaven, and said, Father, the hour is come; glorify Thy son, that Thy son also may glorify Thee: 2 as thou hast given him power over all flesh, that he should give eternal life to as many as Thou hast given him, 3 and this is life eternal, that they might know Thee, the only true Elohim, and Jesus Christ, whom Thou hast sent.

Trinitarians and modalists forget the fact that Jesus (Yehoshua) has a God who he worshiped according to the Shema, “Hear O Israel YHWH our God, YHWH is one” so if you have Jesus (Yehoshua) as the god who you worship, then you are worshiping a different god than he did. I believe we should have the same God as Jesus (Yehoshua), since he told us that we do in John 20:17 which I will get to.

Another place where Jesus (Yehoshua) says he is not speaking for himself, but is only speaking for YHWH is found in the book of John.

John 7:14 Now about the midst of the feast Jesus went up into the temple, and taught. 15 And the Jews marvelled, saying, How is it that this man has learning, when he has never studied? 16 Jesus answered them, and said, “My doctrine is not mine, but His that sent me. 17 If any man will do His will, he shall know of the doctrine, whether it be of God, or whether I speak of myself.“

Remember that he said his Father was the one who sent him, so he’s giving his Father’s doctrine, not his own. Which goes back to only speaking for YHWH, as his Father commands him. He never spoke on his own accord, he only spoke for the Father.

John 20:17 Jesus saith unto her, Don’t cling to me; for I am not yet ascended to my Father: but go to my brethren, and say unto them, I ascend unto my Father, and your Father; and to my God, and your God.

Here Jesus (Yehoshua) tells us that we have the same God and he is not our God because he says he has to go somewhere to go to our God which means our God was not standing there speaking.

It makes much more sense when we see that his Father is our Father, and his God is our God. We are co-heirs with Christ, and he was the first born of many brethren. This all makes sense when we realize he’s our brother, and we have the same Father.

If him being begotten of YHWH means he is YHWH, then we are too. We’re begotten according to scripture. All the verses that get used as supposed proofs that he is YHWH, don’t work to prove that, since they can be said about other humans.

1 John 5:18 We know that whosoever is begotten of God sinneth not; but he that is begotten of God keepeth himself, and that wicked one toucheth him not. 19 And we know that we are of God, and the whole world lieth in wickedness. 20 And we know that the son of God is come, and hath given us an understanding, that we may know Him that is true, and we are in Him that is true, even in His son Jesus Christ. This is the true God, and eternal life. 21 Little children, keep yourselves from idols. Amen.

John 17:3 and this is life eternal, that they might know Thee, the only true God, and Jesus Christ, whom Thou hast sent. 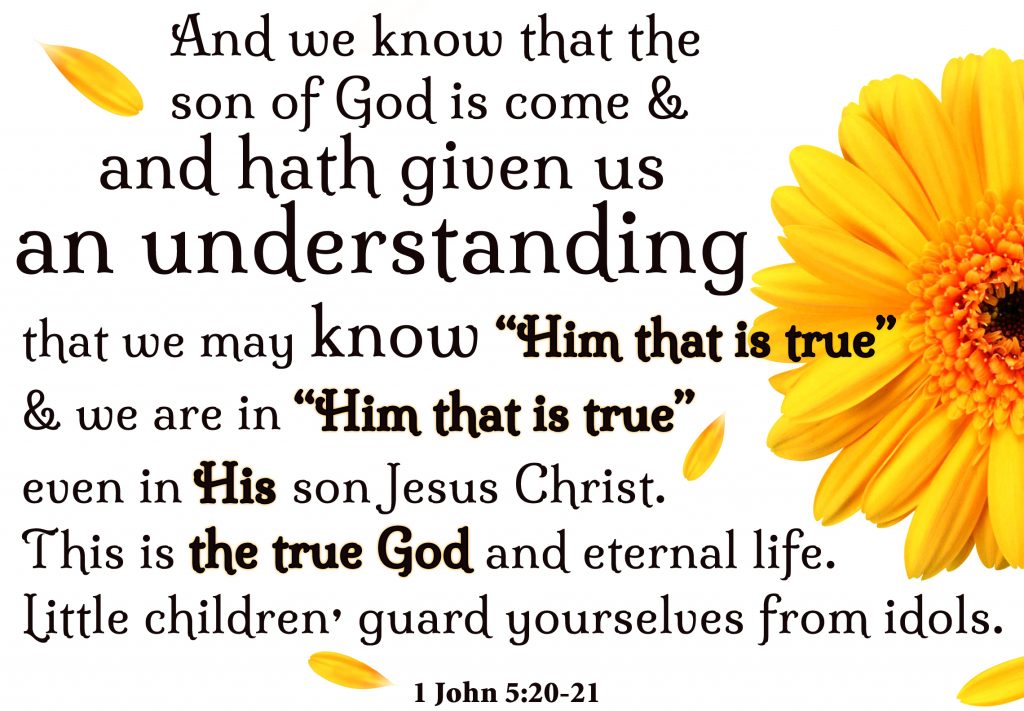